Mobile World Congress 2018 has come and gone, with the dust settling in Barcelona and several manufacturers laying out their consumer tech plans for the rest of the year. While there were a few absentees as far as flagship phone reveals, there was plenty to fawn over at MWC 18. To that end, we've listed five of the best devices/products unveiled in the Spanish city over the past few days.

If there is one name that dominates MWC, it has to be Samsung. The South Korean company's press conference on Day Zero is often the most talked about and viewed event at Mobile World Congress, possibility contributing as to why competitors Huawei and LG opted to forego a flagship phone reveal of their own.

This time round it was the Galaxy S9 and S9 Plus that stole the show, with Samsung making a number of refinements to last year's impressive Galaxy S8. Sporting a number of improvements to the cameras and AI, as well a bit more fine tuning across the board, the S9 and S9 Plus will likely be the most coveted devices in SA when they land next month.

A bit of a surprise offering, the new Xperia XZ2 Compact from Sony could be a sleeper hit for the first half of the year. While the larger XZ2 got much of the attention, the smaller 5" device carries a few notable elements. Like the flagship XZ2, it boasts Qualcomm's latest Snapdragon 845 chipset, as well as 4 GB of RAM and 19 MP camera capable of 4K recording at 960 fps slow-mo at 1080p.

In terms of specifications then, the Compact is right up there with some of the best flagship phones around. If Sony Mobile South Africa can get the pricing right when the device arrives in the country, they could have a real winner on their hands in terms of value for money.

2018 was HMD Global's second trip to Mobile World Congress with the Nokia Mobile brand, and following last year's success, expectations were high. While we didn't get a device that grabbed as many headlines as the new 3310, it was a redesigned retro feature phone that once again took all the attention this time round - the Nokia 8810 (4G).

Based on the iconic 'Matrix' slider phone, the new 3310 comes to polar opposite colour options - bright yellow or black. It may not conjure up the same nostalgic emotions that the 3310 does, but the 8810 should appeal to those that touted a slider back in the day. Expected to be available in May, this new Nokia device could be another statement piece.

Now for something that probably isn't going to be available in South Africa anytime soon. The Vivo Apex concept phone is one that fully embraces the idea of bezel-less design. With a display that stretches frame to frame, this concept also features something that the big phonemakers are yet to bring to market: a fingerprint scanner under the screen.

This version also takes up the bottom half of the display itself, so a user could potentially place their registered fingerprint wherever they wish to unlock the device. There's an interesting quirk too, with the front facing camera popping out the top of the frame.

Yes, a microSD card was one of the best things at MWC this year. The "Extreme A2 microSD UHS-1 microSDXC" card boasts a mammoth 400 GB on its small form factor, while also claiming to be the world's fastest storage device of its nature, according to SanDisk.

The company revealed a similar offering a little over six months ago, but this latest card is said to be 50% faster, with read speeds of 160 MB/s and write speeds of 90 MB/s. This is thanks to proprietary PCI-e technology from SanDisk's parent company Western Digital. While it is indeed the fastest microSD at the moment, it is not the largest, with Integral Memory featuring one with 512 GB. 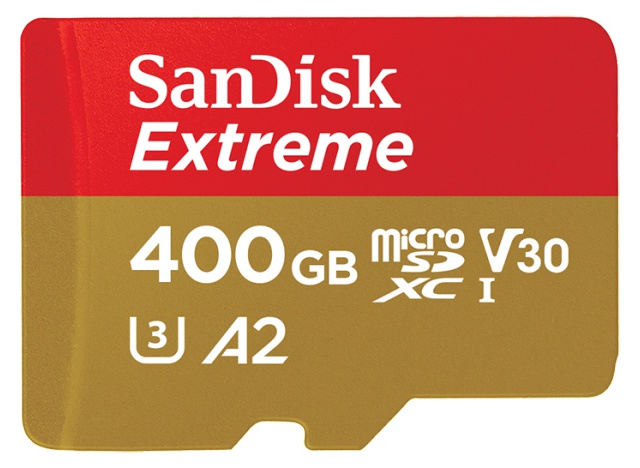