The company said that this quarter saw the top two smartphone vendors, Apple and Samsung, raising their combined smartphone market share to 49.3%, up from 29.3% recorded in Q1 2011.

This widened the duo’s lead over their competitor Nokia, which saw its market share drop to 9.2%.

“Smartphone sales are becoming of paramount importance at a worldwide level. For example, smartphone volumes contributed to approximately 43.9% of overall sales for Samsung as opposed to 16% for Nokia,” explained Anshul Gupta, principal research analyst at Gartner.

Driven by the continued success of the iPhone 4S, Apple’s sales grew a staggering 96.2% in Q1 2012 as the latest version of Cupertino’s smartphone entered into new markets. Gartner asserted that sales in China were particularly strong this quarter. At more than five million units, China became the second biggest market for Apple after the US.

“RIM desperately needs to deliver winning BB10 products to retain users and stay competitive. This will be very challenging, because BB10 lacks strong developer support, and a new BB10 device will only be available in the fourth quarter of 2012,” stated Gupta. 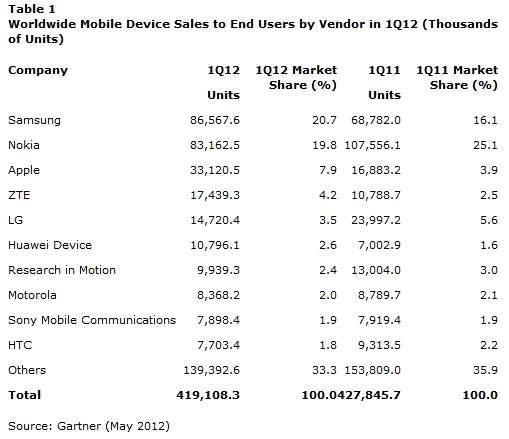 According to Gartner’s analysis, the smartphone market has become highly commoditised and differentiation is becoming more of a challenge for manufacturers.

“This is particularly true for smartphones based on the Android OS, where a strong commoditization trend is at work and most players are finding it hard to break the mould,” Gupta said. “At the high end, hardware features coupled with applications and services are helping differentiation, but this is restricted to major players with intellectual property assets.”

In the mid to low-end segment of the market, Gupta stated that price is increasingly becoming the sole differentiator. Price is only set to become more important as new players seek to enter the smartphone space, leading to increased competition, low profitability and scattered market share. 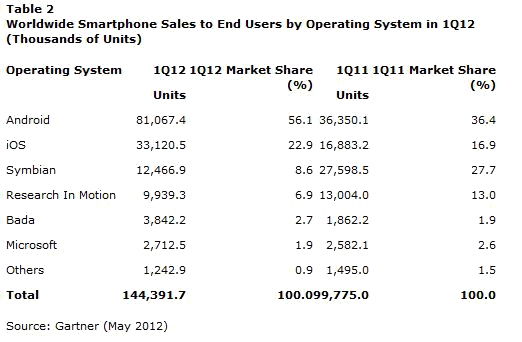 According to Gartner, worldwide sales of mobile phones reached 419.1 million units during Q1 2012, representing a 2% decline compared to Q1 2011. Gartner asserted that this marks the first time since Q2 2009 that the mobile phone market declined.

“Global sales of mobile devices declined more than expected due to a slowdown in demand from the Asia/Pacific region,” explained Gupta. “The first quarter, traditionally the strongest quarter for Asia – which is driven by Chinese New Year, saw a lack of new product launches from leading manufacturers, and users delayed upgrades in the hope of better smartphone deals arriving later in the year.”

Annette Zimmermann, principal research analyst at Gartner added that: “The lower results in the first quarter of 2012 have led us to be cautious about sales for the remainder of the year. “The continued roll-out of third generation (3G)-based smartphones by local and regional manufacturers such as Huawei, ZTE, Lenovo, Yulong and TCL Communication should help spur demand in China.”

“In addition, the arrival of new products in mature markets based on new versions of the Android and Windows Phone operating systems (OSs), and the launch of the Apple iPhone 5 will help drive a stronger second half in Western Europe and North America. However, as we are starting to update our market forecast we feel a downward adjustment to our 2012 figures, in the range of 20 million units, is unavoidable.”

Gartner also concurred with Strategy Analytics, with its assertion that Samsung overtook Nokia to become the world’s top mobile handset vendor during the quarter, a notable accomplishment, since the Espoo-based cellphone giant has had an iron grip on the top spot since 1998.

In related news, the IDC (International Data Corporation) recently analysed Q1 2012 tablet sales, revealing a dramatic decrease in the shipment of Android-based tablets, which were offset by a strong quarter from Apple and its iPad.
TAGS:
AppleGartnermarket researchNokiamobile phonesmartphone
USER COMMENTS

Preparing for the next disruption: 10 analytics trends to watch in 2022
Samsung Galaxy S3 mini
Fitbit Versa