Research In Motion looks to boost the sales figures of its BlackBerry smartphones by expanding the number of devices available within its ranges, including the classy Bold line-up. The new Bold 9790 comes in at a slightly lower price-point, but does it possess the same aristocratic blood as its sharply dressed older brother - the Bold 9900?

This display makes text easy to read and boasts some good viewing angles, nicely saturated colours and can be used outside in direct sunlight with little glare visible. It doesn’t quite match the pixel densities and resolution available on devices like the iPhone 4S, Samsung Galaxy Note and -Nexus though.

Besides the responsive touchscreen, RIM’s Bold 9790 offers snappy performance courtesy of its Marvel Tavor MG1 processor (like the Curve 9380). This processor does sport a quicker clock speed of 1GHz, compared to the 806 MHz on offer with the all-touch Curve.

Along with the phone’s good dollop of RAM (768 MB), the processor makes quick work of running apps and multitasking within the latest edition of RIM’s mobile operating system - BlackBerry 7 OS. That said, it looks like BlackBerry devices will only be on par with their quad-core smartphone rivals later this year, when the company’s first BlackBerry 10 platform-powered devices emerge from its Canadian workshop. Users have a decent amount (8 GB) of internal storage that can be expanded via microSD card slot to up to 40 GB.

RIM equipped the 9790 with a 5 MP auto-focus camera with LED flash, which enables you to capture detailed stills, and handles close-up shots better than the fixed-focus snappers on offer on the Curve 9360 and 9380.

Unfortunately video is not the 9790’s strong point. We were quick to criticise the Curve 9380 on only being able to record VGA video, but on a more expensive model such as this, having no HD ready video recording is almost unforgivable.

Even though we put the phone through its paces, doing things like snapping photos, browsing the web, connecting to Wi-Fi and chatting on BBM, its 1230 mAh Li-Ion battery managed to last an entire two days, doubling the average of modern smartphones. 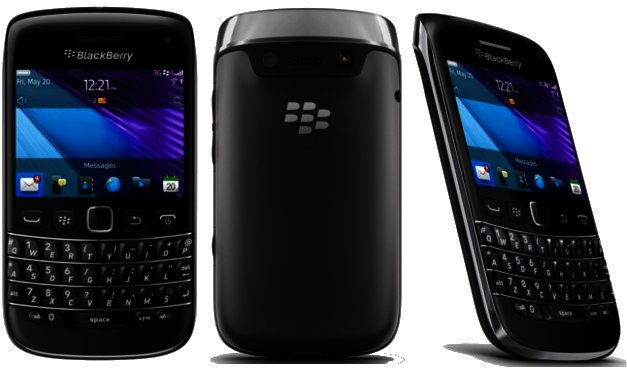 Also onboard is Bluetooth 2.1 with A2DP (which allows you to stream music to a wireless Bluetooth-enabled headset) and EDR (enhanced data rate), which is rather dated compared to devices like the new Samsung Galaxy S3 and iPhone 4S that offer version 4 already.

The R5k RRP also nets you HSDPA connectivity with downloads speeds of up to 7.2 Mbps and upload speeds of up to 5.76 Mbps, GPS with a-GPS support and Wi-Fi 802.11 n. You do not get FM radio or Wi-Fi hotspot functionality, although the latter should be accessible when the BlackBerry 7.1 OS update becomes available.

If you cannot afford the R7700 asking price of its older sibling, then the Bold 9790 will provide you with the same premium design and functionality for around R2600 less (R5100).

Excellent QWERTY keyboard and touchscreen; expandable storage; eye-catching design; quick and responsive due to the OS and snappy processor; one of the better snappers for RIM’s devices; premium feel in hand.

No FM radio; no Wi-Fi hotspot functionality; and single-core CPU.

PROS
Excellent QWERTY keyboard and touchscreen; expandable storage; eye-catching design; quick and responsive due to the OS and snappy processor; one of the better snappers for RIM's devices premium feel in hand.