Technology giant Google has made the latest stable version of the world’s most used desktop web browser available for download. Chrome 23 aims to avert challenges from browser rivals such as Mozilla’s Firefox 16 with the addition of new features.

This latest release includes an option to send a “do not track” request to websites as well as web services. Google stated that the effectiveness of these requests is dependent upon the response received from websites and services, and the search giant is working with firms on a common way to respond to these requests in the near future.

In addition, users will also have more control over any website’s permissions for activating features such as geolocation, presenting you with pop-up messages, as well as camera- or microphone access.

The feature will save users time and effort as they do not have to dig through a website’s settings pages in order to find these permissions. You simply click on the page- or lock icon that appears next to a website’s address (see inline image below) to see a list of permissions and tweak these according to your preferences. 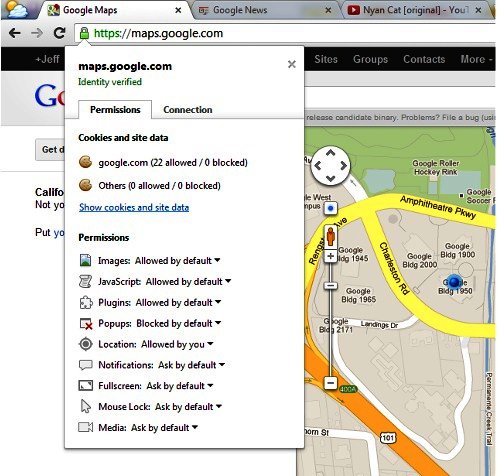 Notebook and ultrabook users will appreciate the fact that Google has enabled GPU-accelerated video decoding for Chrome on Windows. The company stated that this move will go a long way to conserving battery life of your notebook PCs, since dedicated graphics cards consume significantly less power than a computer’s CPU.

“In our tests, the battery lasted 25% longer when GPU-accelerated video decoding was enabled. Now Chrome users on Windows will experience longer battery life so they don’t get cut off while watching their favourite YouTube video on repeat,” a blogpost by Ami Fischman, a Google software engineer read.

Users who are new to Chrome can go to Google’s page to download version 23 of this browser. Those who already have Chrome installed on their PC can simply click on the control and customisation icon (three vertically stacked dashes on the right) and select “About Google Chrome” to kick off the automatic update process.