Our brief hands on with the Taiwanese smartphone and tablet maker’s flagship WP8 device left us very impressed. Although it does resemble a Lumia smartphone from the front, its derriere is a lot more unique. The back cover is curved and sports a soft-touch finish making it feel extremely comfortable to hold and barely noticeable within your jeans pocket. This bootylicious design also makes the device comes across as thinner than its 10.12 mm thick frame.

HTC equipped the 8X with a 4.3" HD-Ready (720 x 1280 resolution; 342 ppi pixel density) Super LCD 2 display that is protected by Gorilla Glass and also features optical lamination to reduce reflections and glare. Our brief hands-on session with the phone was indoors, so we can’t comment about how effective this lamination is at reducing glare.

However, we can report that the high resolution of the display certainly makes photos, videos and webpages look crisp and sublimely detailed.

Under the Taiwanese bonnet

The 8X is powered by a dual-core 1.5 GHz Qualcomm S4 processor and features 1 GB of RAM, with this duo delivering a smooth user experience whilst navigating WP8 and running apps.

There does not appear to be a large amount of pre-installed apps from HTC to help distinguish its device from the rest of the WP8 crowd, although there is a dedicated section for downloading HTC apps from within the Windows Phone Store.

What we did like was the option that allows the device to display HTC’s eye catching weather widget as the lock screen of your smartphone. There is also an HTC app that aggregates your up-to-date weather info, stock data as well as your favourite news sites within a Live Tile.

More significant factors that assist in setting the 8X apart, is its front facing snapper and, of course, the integration of Beats Audio.

HTC’s new 2.1 megapixel, f/2.0 aperture, 88° ultra-wide angle front-facing camera, enables users to snap photos with up to four people in a single shot. We found that it works well, allowing you to easily get more people into a single shot. On the back, the 8X sports an 8 MP CMOS rear-facing camera with backside-illumination (BSI) for improved low-light performance. 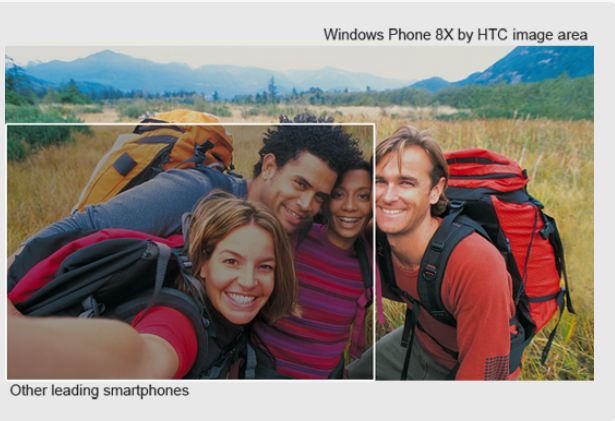 Now the self portrait shot becomes the group portrait photo with the Windows Phone 8X.

Another feature you will only find on the 8X (when it comes to WP8 devices anyways) is Beats Audio, delivering a high quality music listening experience. The sound quality and volume boost really comes into its own when you connect a pair of headphones as the Beats Audio enhancements not only provides a richer level of sound but also a significantly louder one.

On the whole, our far-too-brief time with the Windows Phone 8X left us impressed and counting the days until we receive the review unit (hopefully along with a pair of Beats earphones to go along with it).

During the showcase, HTC showed a clip from a Vodacom advert, which revealed that this smartphone will be available on a Smart Standard 229 contract for R369 per month over 24 months when it launches locally later this month.

In related news, HTC also recently updated its One X smartphone, with the announcement of the One X+. This smartphone operates on Android Jelly Bean along with HTC’s Sense 4+ skin and is powered by a snappier (AP37) Nvidia Tegra 3 quad-core processor clocked at 1.7 GHz. Unfortunately, this device is not destined for South Africa.