After pulling the wraps off of its new design identity called LStyle earlier this year, LG Electronics (LG) has unveiled a new user interface (UI) for its Android Ice Cream Sandwich (ICS) powered mobile devices, dubbed Optimus UI 3.0. According to the Korean firm, Optimus UI 3.0 is designed with user convenience and speed in mind.

Optimus UI 3.0 brings some news features to the company’s UI such as Quick Memo and a novel unlock functionality, which allows users to unlock their smartphone by dragging their finger anywhere on the touchscreen. Quick Memo enables users to take notes on the display by using a finger, which they can then share via social networks, text message or e-mail.

Besides Quick Memo some other new features of Optimus UI 3.0 include a pattern lock function, whereby the most frequently used features such as the camera or music player can be automatically opened once the smartphone is unlocked, similar to HTC’s unlock ring.

The new voice shutter allows users to capture photos by using voice commands, whilst users will be able to choose the best shot from amongst multiple images captured, including the moment just before the shutter button is released, via another special camera function.

Also included with the new UI is an icon customiser, making it possible for users to set their own photos as icons and shortcut images, as well as the addition of a download category to the menu for easier app organisation. 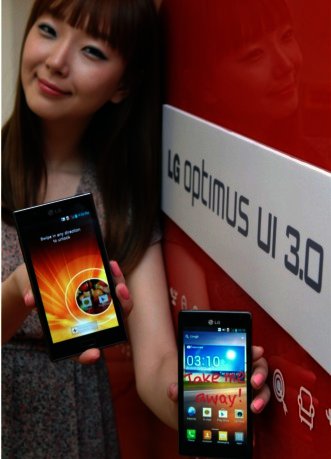 LG stated that Optimus UI 3.0 will make its debut on the Optimus LTE II which launches this week in South Korea, followed by the LG Optimus 4X HD in June. The latter is the company’s first quad-core smartphone, powered by Nvidia’s 1.5 GHz Tegra 3 and sporting a 4.7" True HD (1280 x 720) IPS display and 8 MP BSI (backside illumination) sensor camera with LED flash.

The Optimus 4X HD was on display at the CTIA Wireless 2012 expo along with a few of the company’s other high end devices including the Samsung Galaxy Note challenging Optimus Vu and Optimus 3D Max. LG’s Optimus Vu features a large 5" (768 x 1024) stylus-and-finger-friendly IPS display, is powered by a 1.5 GHz dual-core Qualcomm MSM8660 Snapdragon processor, and packs in 32 GB of internal storage and a large 2080 mAh battery.

The 9.6 mm thin Optimus 3D Max boasts a 4.3" 3D WVGA (480 x 800) display that is protected by Corning Gorilla glass and delivers a glasses-free 3D viewing experience with 3D Hot Key to switch between 2D and 3D.

“With smartphone hardware becoming more and more similar, it’s important for manufacturers to differentiate their products from the competition through the user interface,” explained Dr. Jong-seok Park, president and CEO of LG Electronics Mobile Communications company.

“Both carriers and customers tell us that they want LG phones to look and feel unique and the UI plays a big part in that. LG is really going to push the boundaries of what is possible in user interfaces starting with Optimus UI 3.0.”

In related news, market research firm Gartner recently released its analyses of the global smartphone and mobile phone sales figures during Q1 2012. LG sold over 14.72 million mobile phones during the first quarter of this year, giving the company a 3.5% share of the global mobile phone market.