RIM (Research In Motion) has announced that the BlackBerry 7.1 OS software update, the latest version of the BlackBerry smartphone operating system (OS), is now available for customers in South Africa.

This software update is available for the BlackBerry Bold 9900, BlackBerry Torch 9810, the Porsche Design P’9981 smartphone, BlackBerry Curve 9360 as well as the all touch Curve 9380 smartphones.

Customers can upgrade their smartphones to BlackBerry OS 7.1 for free over-the-air (OTA) by going to “Options”, and clicking on “Device” and then “Software Updates”. You can also perform an OS upgrade by opening the Canadian firm’s website in your browser, or using the BlackBerry Desktop Software.

We recommend connecting your smartphone to a PC to obtain the update via BlackBerry Desktop Software, since it is by far the quickest and most reliable way to update your device, with the update on our Torch 9810 weighing in at around 90 MB.

A feature we find quite handy on Android-powered smartphones and Apple’s iPhone - mobile hotspot functionality - is now also available to BlackBerry users via BlackBerry 7.1 OS. This feature enables BlackBerry smartphone users to share their internet connection with up to five other Wi-Fi-enabled devices such as tablets or ultrabooks. You will require a data bundle to utilise this feature though, since BIS (BlackBerry Internet Service) only covers on-device browsing. 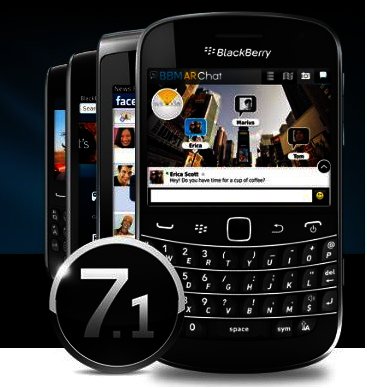 In addition, customers using a BlackBerry Curve 9360 or Curve 9380 smartphone will appreciate the new FM radio function, which lets them listen to local FM radio stations, when they have a wired headphone plugged into their BlackBerry smartphone.

In related news, RIM and the University of Pretoria (UP) recently announced the opening of the BlackBerry apps lab at the main campus of UP, which is tasked with accelerating mobile application development within South Africa, and in the process create new economic opportunities and jobs in the mobile space.
TAGS:
RIMsmartphone OSmobile OSmobile platformBlackBerrysoftware update
USER COMMENTS