Right after surpassing the three million global sales mark with its Galaxy Note II phablet in the first 30 days of its availability, Korean tech giant Samsung has now passed the 30 million worldwide sales milestone with its Galaxy S3 (review) flagship.

It took the company just five months (157 days) to pass this latest milestone, after the Galaxy S3 made its international debut during May of this year.

To put the record selling pace of the S3 into perspective, the Galaxy S2 only managed to pass the ten million worldwide sales mark during a similar selling period of 150 days. So like the Galaxy Note II, the S3 is selling at around three times the rate of its predecessor. The S3 took just two months to hit the ten million global sales mark, by selling at the daily rate of around 190 000 devices. 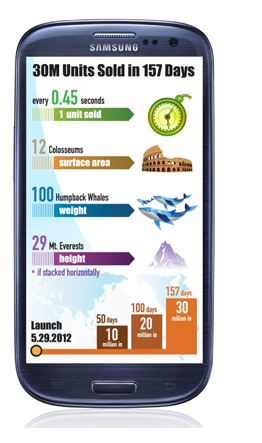 Samsung is not the only big sales fish in the smartphone pond however, as Apple blew passed the five million sales mark with its new iPhone 5, just three days after its international launch on 21 September.

“The Galaxy S3 continues to be a runaway favourite with customers around the world. Meeting this sales milestone in five months sets another record for Samsung and we are extremely proud and yet motivated to continue to provide our customers with products that they love. On behalf of Samsung Mobile, I appreciate millions of customers around the world that have chosen the Galaxy S3,” stated JK Shin, president and head of the IT and Mobile Communications Division at Samsung.