Samsung is the world’s biggest smartphone maker, in no small part due to its successful range of Android-powered Galaxy smartphones. Taking on the likes of Apple’s iPhone 4S is the Korean tech firm’s top-of-the-line Galaxy S II, whilst the more affordable Galaxy Gio aims to empower first-time smartphone buyers. Its new Ace is aimed at users that dig the design of the Gio, but want a bit more zing in the specs department.

The Ace looks very similar to the Gio, except that the edges of the Ace are straighter. It is also slightly bigger than the Gio, but as a result, it comes off as a little more grip-friendly, measuring in at 112.4 x 59.9 x 11.5 mm and tipping the scales at 113 g.

Most of the functionality of this device can be accessed from its 3.5" HVGA (320 x 480, 165 ppi pixel density) capacitive Gorilla Glass touch-screen. It boasts some excellent viewing angles, on par with most rivals including HTC’s Wildfire S, but is trumped by the 3.8" (480 x 800) capacitive touch-screen of the Hauwei IDEOS X5. As is the case with the the Galaxy Gio’s 3.2" (320 x 480 pixels) TFT screen, the Ace’s display is also partial to showing reflections when used outdoors in direct sunlight, and is a real fingerprint magnet. 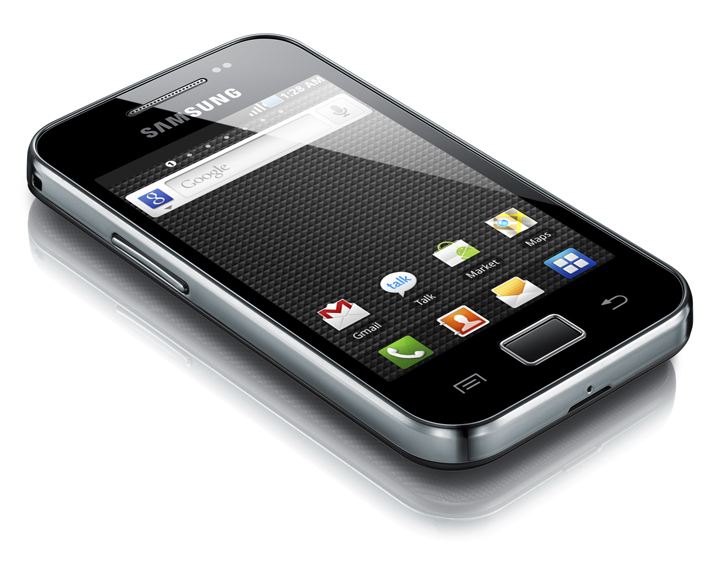 Unlike the Gio, which ran Android Android 2.2.1 (Froyo) out of the box with an update to Gingerbread on the horizon, our Ace test was powered by the more up-to-date Android 2.3.3 (Gingerbread) along with Samsung’s TouchWiz v3.0 skin.

Gingerbread includes, amongst other added functionality, improved power management of your mobile device, taking a more active role in managing battery-hungry apps that also hog the CPU whilst running in the background. 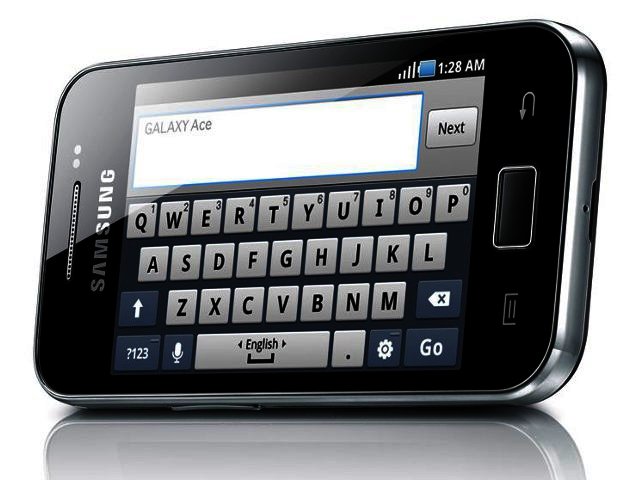 Beating within its robust plastic chest is an Qualcomm MSM7227 chipset, with an ARM 11 CPU, as compared to the Qualcomm’s QCT MSM7227-1 Turbo 800 MHz processor doing duty in the Gio. Completing the processing line-up is an Adreno 200 GPU that handles the graphics, meaning the Ace is on par with the Gio and X5, but boasts a much snappier processor than the Wildfire S’ 600 MHz Snapdragon MSM7227 CPU.

It might match the Gio’s processor in terms of running speed, but surprisingly scored a little less than its cheaper (R1999) sibling during benchmarking tests performed using Smartbench 2011. Samsung’s Galaxy Ace managed to score a total of 483 on the Productivity Index and 967 for the Games Index, compared to the Samsung Galaxy Gio that posted scores of 577 and 977 respectively. Both of these devices performed well when compared to the the X5 (764), and matched the Wildfire S (977) in the Gaming Index, but the X5 holds on to its entry-level Productivity Index crown with an excellent score of 998. 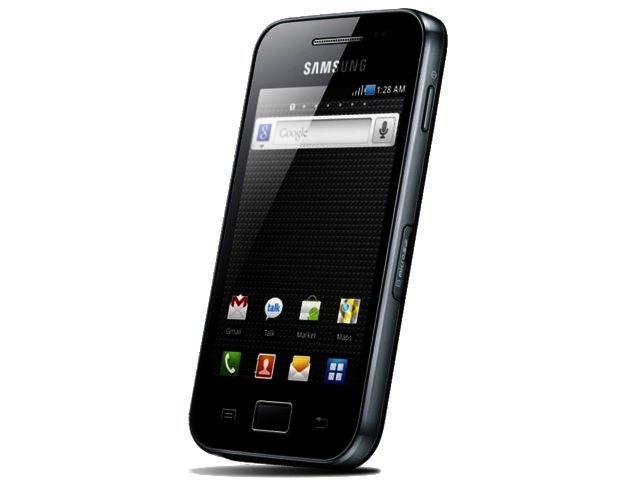 The Ace offers 158 MB of internal storage, which can be boosted via the use of a microSD card, and is able to handle cards that offer up to 32 GB of storage space. There is a 2 GB card included in the retail box which is a necessity since you are unable to capture any photos or record any video until a memory card is inserted.

Also onboard is aGPS, stereo FM radio with RDS, Bluetooth v2.1 with A2DP and the same Li-Ion 1350 mAh battery that does duty in the Gio. It delivers standard performance of around two days with mild usage, but if you stay connected to your work or home network via Wi-Fi (802.11 n) and prefer to utilise the interactive, animated wallpapers, then you can expect this to decrease considerably to around a working day (less than 12 hours).

This smartphone sports a 5 MP auto-focus camera with LED flash that is able to capture very detailed photos with accurate colour. It doesn’t fall in the Nokia N8’s snapper league, but delivers excellent performance for still images on a budget device. The camera is less impressive when it comes to videos though, as it doesn’t offer HD-ready (720p) video recording like the Huawei X5 does, but VGA (640 x 480) video recording at 15 frames per second.

Samsung's Galaxy Ace is a well-rounded budget contender with its 800 MHz processor that allows it to manage daily OS tasks with ease, up-to-date Android 2.3.3 mobile OS, snazzy 5 MP snapper and grip-friendly dimensions. The R2999 pricetag of the Samsung Galaxy Ace comes in slightly higher than that of HTC's Wildfire S (R2888), but the Ace does offer more spec bang for your buck with its faster CPU and added screen real estate.

You have to pay R1000 over and above the price of the Galaxy Gio (R1999), but the Ace runs Android Gingerbread as standard, delivers a more premium look and feel, sports a bit more touchscreen room to employ multi-touch gestures, as well as a much better camera. In our humble opinion, it is one of this year’s top entry-level smartphone entries.

Feels more premium than the Gio due to the larger size and display real estate, good snapper that has a flash, Android Gingerbread powered, hot-swoppable memory card slot.

Cons:
Processor matches Gio’s speed but scores lower on benchmark test, no HD-ready video recording, display is a fingerprint magnet and prone to showing reflections when used in direct sunlight.

PROS
Feels more premium than the Gio due to the larger size and display real estate, good snapper that has a flash, Android Gingerbread powered, hot-swoppable memory card slot.