Unlike the burgeoning smartphone market, the global PC market is continuing to shrink as desktop and notebook PC shipments declined by 7.4% and 13.9% respectively. This according to the latest research from data analytics company Canalys.

Canalys added that worldwide tablet shipments grew by 42.9% in Q2 2013 and despite the growth of tablets winding down in the quarter, the market research company still feels that tablets will outsell notebooks by Q4 of this year. Around the globe demand for smartphones is increasing, further cannibalising PC sales.

PC shipments in EMEA (Europe, Middle East, and Africa) fell by 3% year-on-year during Q2, which is the first decline after two successive quarters of double-digit growth according to Canalys. Western Europe as well as Central- and Eastern Europe continued to be challenging for vendors, with annual declines of 10% and 3% respectively.

Within Asia Pacific, PC shipments declined by a mere 0.5% year-on-year to more than 40 million units, with this region hardest hit by slow shipments in the People’s Republic of China. China alone accounted for nearly 45% of this region’s shipments and declined by around 6% in Q2. 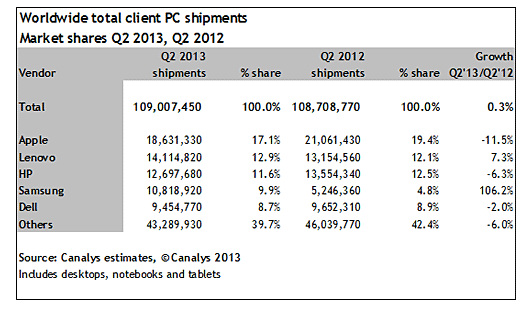 According to Canalys, Apple remained the top PC vendor in Q2 with a 4.5 million unit lead over second-placed Lenovo. Canalys includes tablet shipments in this tally. The analytics firm did however note that Apple’s share fell more than two percentage points to 17.1% from 19.4% in Q2 2012, due to an annual decrease in iPad shipments.

When looking at desktop and notebook shipments from Apple, these devices only accounted for around 20% of the company’s total PC shipments. Canalys asserts that because tablet rivals are attacking Apple on price, the iPhone-maker has to bring new innovation to future generations of its iPad range if it is to maintain the lead it has built in the PC market.

Chinese firm Lenovo had an impressive Q2, as the company gained share in its core notebook and desktop categories, as well as tablets. Lenovo’s performance in Q2 was driven by strong annual growth in EMEA (34%), the US (28%) as well as Latin America (93%). The company managed to ship around 1.5 million tablets.

“It is striking how successful it has been in globalising its PC business and breaking the 1 million unit barrier is an important milestone for its tablet shipments,” noted Canalys analyst James Wang. “Lenovo is on an upward curve with its tablets, expanding in mainland China and Latin America, where there is little competition from the likes of Google or Amazon.”

According to Canalys, HP has managed to overtake Samsung in order to regain third place. HP recently changed its tablet strategy and launched its first Android-powered tablet in Q2 dubbed the Slate 7.

“HP has a broad enterprise portfolio, channel relationships and global reach that others still cannot match,” stated Canalys research analyst Pin-Chen Tang. “To increase its market share it should look to leverage its strengths in the enterprise to advance Android in business.”