Samsung’s worldwide smartphone shipments grew by 55% annually as the Korean tech giant shipped a record 88.4 million smartphones. This allowed the company to claim a record 35% market share in Q3 2013.

The firm managed to more than double the shipments by its closest competitor - Apple - during the quarter. Even though shipments of the firm’s flagship Galaxy S4 (review) slowed, the company benefitted from strong demand for its new Galaxy Note 3 phablet as well as from a sales boost for mass-market mobile devices including the Galaxy Y.

Apple managed to ship 33.8 million iPhones worldwide in Q3 2013, which represents an increase of 26% year-on-year. This is only around half the overall smartphone industry average of 45%, according to SA.

The market research firm added that Apple’s global smartphone market share has dipped noticeably from 16% to 13% over the course of the past year. Despite this, SA expects that Apple will rebound sharply and regain some market share in the upcoming Q4 2013 as a result of high demand for its newest smartphone - the iPhone 5s.

Rounding up the Top 3

The Chinese smartphone maker’s popular models proved to be the Ascend P6 (our top choice for a midrange smartphone) and the G610. Huawei remains very strong in its backyard of China, but its position is less robust in other major markets such as the US and Europe.

SA asserts that Huawei will need to aggressively enlarge its mobile footprint within the American and European markets, if the company aims to challenge the established smartphone duopoly of Samsung and Apple during 2014. 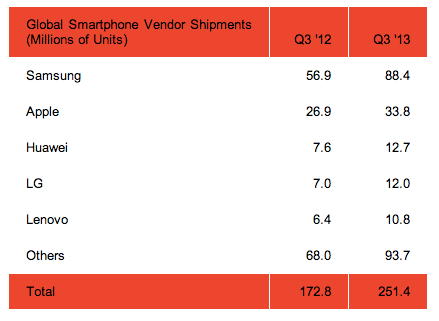 LG manages to ship 12 million smartphones worldwide, providing the Korean company with a 5% market stake during Q3 2013. LG’s mobile mobile shipments increased by 71% year-on-year, making it the fastest-growing OEM amongst the top 5 brands according to SA. The company is doing very well in the European mobile market, but is struggling to gain a foothold in China as well as India.

Lenovo shipped 10.8 million smartphones globally for a 4% market share, laying claim to fifth position in Q3 2013. The Chinese firm is popular among mass-market consumers within its home turf and is also expanding internationally. It appears that one of SA’s Top 3 mobile trends for 2013, namely the rise of the Chinese OEMs, is coming to fruition seeing that two of the world’s top 5 smartphone vendors are Chinese firms.

In related news, SA recently revealed that the global multi-core smartphone applications processor market registered more than two-fold year-on-year growth in the first half of 2013.