A mere day before Amazon is expected to announce its new Kindles, another player in the ebook space, the Toronto based Kobo, has launched two new e-ink ereaders and a tablet of its own.
The first new addition to its line-up is the Kobo Glo. The e-reader marries an e-ink reading experience with its ComfortLight technology, which provides for screen illumination when users wish to read in the dark.
The 6" device boasts a 1 GHZ Freescale, Solo 6, processor and 2 GB of internal storage. However, unlike the existing Kindle Touch, this can be expanded via the use of a microSD card, up to 32 GB.
The company has asserted that the processor will account for “ultra-fast page turns and highly responsive touch interactivity.” 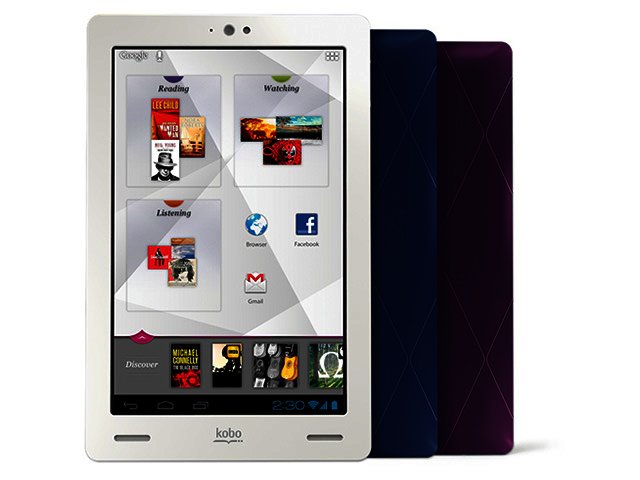 Kobo's newly announced Kobo Arc tablet, along with two new e-ink readers.
Glo, Mini and Arc
According to Goodereader.com, the Kobo Glo will offer a very decent battery life of one month when used without ComfortLight, or 55 hours (a little more than two days) if the integrated illumination is used.
Priced at around $130 (R1 079), the Kobo Glo will apparently be made available in several alluringly named colours, such as Pink Sunset, Blue Moon, Silver Star, and Black Night.
The second, more budget offering announced, is the $80 (R664) Kobo Mini. This sports a 5" screen, onboard Wi-Fi and weighs in at 134 g. As expected from a device that is aimed at being an entry-level ereader, the device does not cater to external storage, although the company has explained that it will accommodate up to 1 000 ebooks.
However, it is understandably the Kobo Arc tablet that is the pinnacle of Kobo’s new range. The 7" Android device has been coated with Android 4.0 (Ice Cream Sandwich), although this will apparently be updated to Jelly Bean in the months to come.
It sports a 1.5 GHz dual-core processor, 1 GB of memory, and a display with a 1280 x 800 resolution. The tablet is set to come in two storage flavours – 8 GB and 16 GB – with a price tag of $200 (R1 660) and $250 (R2 075) respectively. The tablet will further sport a new interface called Tapestries, which will enable users to ‘pin’ what they like, after which the Kobo Arc would bring more similar content.
To the point
Judging by the price point alone, the Kobo Arc is clearly intended to compete with the Google Nexus tablet and the Kindle Fire. However, counting against it is the fact that its predecessor, the Kobo Vox, hardly overwhelmed the market when it was released.
While we are big fans of Kobo’s app, particularly on the iPad, we can’t help wondering whether general users will rather opt for whatever Amazon and Apple have up their sleeves in the months ahead. Indeed, a Kindle Fire 2 and a new e-ink reader from Amazon seems imminent, while the much rumoured iPad Mini may well be Kobo, Amazon’s and even Google’s worst nightmare.

Despite this, more competition is always good for driving prices down and making e-reading more accessible to a range of markets, and on this basis, Kobo’s announcement places its e-readers in the ‘dark horse/underdog’ category.

As yet, local availability and prices have not been announced, although the devices are set to launch Stateside in October.