Mobile Games worth your time - Blades of Brim

Amongst all the terrific games to show their face of late on console, such as Bloodborne (review), Until Dawn (preview), Battleborn (preview), gems such as Submerged (review) and most recently Metal Gear Solid V: The Phantom Pain (preview), there are a number of titles on mobile devices that have shone this year in their own right. One genre that has figuratively run away with our heart and stolen a fair share of our time is the endless runner, and amongst these, swinging a huge sword has been SYBO’s Brim.

The endless runner mechanic is simple and straightforward enough – you run as far as you can until you die. Rinse, repeat. However, Brim adds a few elements that make running in a straight line considerably more interesting. Your goal may be to traverse a seemingly never-ending world, but as you do so, you can collect coins (the game’s currency) and you also have some parkour elements to play with, such as  running on walls, which you can use to build up a string of satisfying attacks. 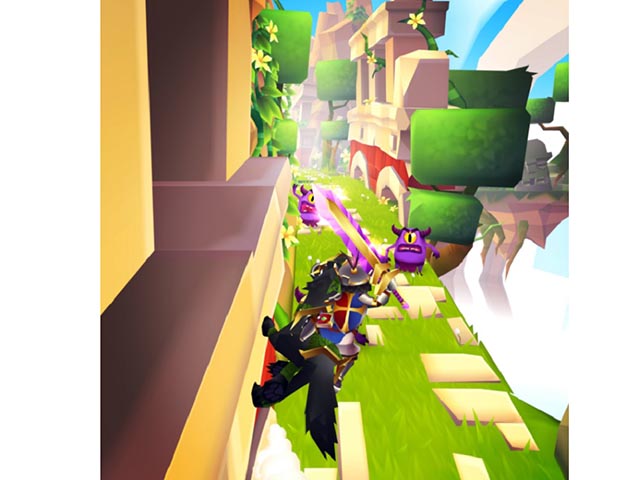 Left swipe, right swipe, and swiping down generates a left slash of your equipped weapon, a right slash or a roll into enemies directly in front of you respectively, and if there is one thing Brim doesn’t skimp on, it’s an abundance of enemies with which to deal. Brim is a bit forgiving in the sense that you have a health bar; miss an enemy or two and you will lose a portion of one of your three hearts. Lose your hearts completely and you will either be dead or standing outside a window holding a boombox.

Where Brim really succeeds in keeping gameplay compulsive though, is in the fact that you can collect or buy an array of weapons to dispatch your foes, as well as different armour and mounts to find in treasure chests. Each of these have different benefits, as they grant certain boosts to a few of your power ups (more about this later).

Furthermore, you can also buy boosts – a score boost, pet boost, health boost and a pet whistle, needed to summon your pet, using another currency called essence. Thankfully, you don’t actually have to spend much on in app purchases. Essences are scattered throughout Brim which you can collect, and completing daily tasks also rewards you with some. Play enough and you don’t need to dip your hand into your wallet at all if you don’t want to. 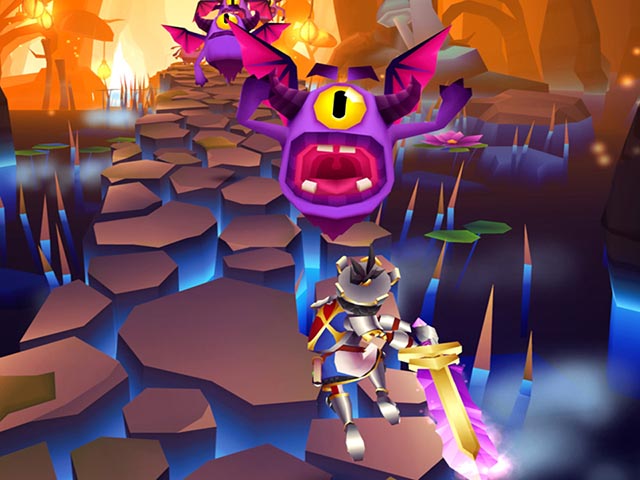 Power to the player

The aforementioned power ups are actually pretty good - a wings powerup grants you flight for a limited time, a green sword boosts the damage of your weapon, a purple shield makes you invincible for a short time or a Midas touch, which turns enemies in a set radius into gold. Each piece of armour you collect or weapon you earn (or buy) increases the duration of one of these power ups.

Like many games that want to keep you coming back for more, Brim throws a number of challenges your way; complete these successfully and you level up, with each level increasing your score. Additionally, the dungeons – which are more like tunnels – have a quest of their own, such as defeating a certain number of enemies in the limited time frame the dungeon lasts for. 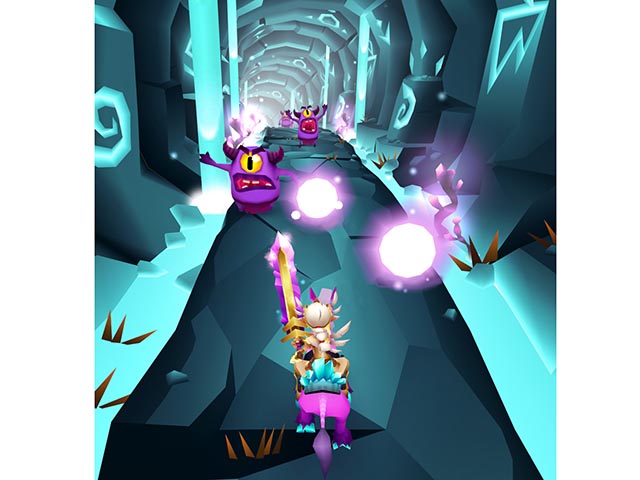 And now for something new

Most recently though, the game also added a bit of new content, in the form of Lightning Portals, which lead into terrific and quite tough dungeons, but offer you a new form of reward in Lightning Idols. Collect enough of these and you can access premium weapons and armour, as well as a new character to play as. Speaking of this, you start off with one set character, Aric, and as you progress you unlock others. Each of course has its own specific armour sets.

Then of course, there are the pets; well, if you are inclined to call fire breathing horses and lightning invoking wolves pets. Upgrading these guys increases the time you can ride them, and thus the time you can use their particular attack ability against enemies.

If there is one downside to the game it is the sameness of the enemies; you pretty much have bouncing purple creatures (goons) who will slap you with their feet given the chance, flying purple creatures (flappers) which will swoop down and take a bite of your health and large brutish hammer wielding purple creatures (crushers) who can kill you with one shot beneath their oversized hammer. That being said, I would still like to see more variety.

For an endless runner, Blades of Brim is actually fairly deep and quite compelling. This is not entirely surprising, considering that it comes from the same developers, SYBO, as behind Subway Surfers. It is only currently freely available on iOS – sorry Android players.  It’s also a good amount of bite sized fun for when you feel like a bit of gaming but don’t have the time to fire up your console. This makes it an endless runner that I dont have to go very far at all to recommend.