Samsung recently celebrated surpassing the 30 million global sales milestone with its Galaxy S3 flagship smartphone (review). This is not the only sales milestone that the Korean tech giant has to celebrate though, as new research from market research firm Strategy Analytics (SA) has revealed that the S3 managed to overtake Apple’s iPhone 4S (review) as the world’s best selling smartphone within Q3 2012.

According to SA’s Country Share Tracker (CST) service, some of the factors that assisted the S3 in its climb to the top spot was its larger 4.8" HD (720 x 1280) Super AMOLED display, extensive global availability footprint as well as the generous operator subsidies.

SA stated that Samsung shipped more than 18 million Galaxy S3 smartphones worldwide during Q3 2012, amounting to an 11% share of all smartphones shipped globally within the quarter. Furthermore, the S3 has become the world’s best selling smartphone model for the first time ever, knocking the iPhone 5’s predecessor off the top spot.

By comparison, Apple only managed to shipped an estimated 16.2 million iPhone 4S units worldwide to claim second place. SA said that consumers interested in getting an iPhone temporarily held off purchasing one in anticipation of a highly anticipated iPhone 5’s international release that only took place at the end of the quarter.

The analytics company asserts that the S3’s newly acquired position as the world’s best selling smartphone model is more than likely going to be very short-lived. This, as the new iPhone already got off to a solid start by blowing past the five million sales mark just three days after its international launch on 21 September.

SA added that the iPhone 5 has already passed an estimated 6 million units shipped globally during Q3 2012. The firm expects Apple’s new smartphone to out-ship the S3 during Q4 2012 and reclaim the title for Cupertino. 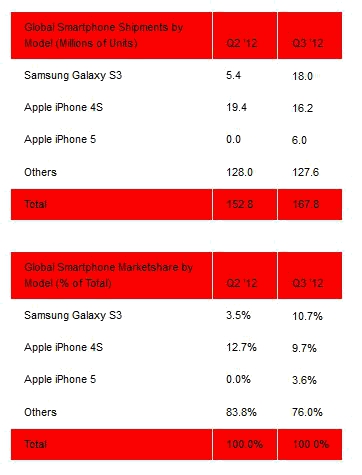