Paying ransom doubles cost of recovering from a Ra...
0
comments

Market research firm Gartner has released its latest research surrounding the worldwide performance of the mobile phone market during Q3 2012. According to the analytics company, global sales of mobile phones to end users amounted to nearly 428 million units during Q3 2012, a slip of 3.1% compared to Q3 2011. Smartphone sales accounted for 39.6% of total mobile phone sales, representing a staggering increase of 46.9% over Q3 2011.

Gupta added that mobile phone sales within China were driven by smartphone sales, with demand for feature phones remaining low. With the launch of new devices, such as  Apple’s iPhone 5, replacement sales also got a boost within mature markets like the US.

Smartphone sales are the engine of the mobile phone market

Smartphones continued to fuel sales of mobile phones worldwide, rising to 169.2 million units during Q3 2012. This segment of the mobile phone market was dominated by Apple and Samsung. Together, these two firms were responsible for 46.5% of the smartphone market, leaving a handful of OEMs (original equipment manufacturers) fighting for a distant third place.

Korean tech giant Samsung continued to increase its mobile phones sales, with these amounting to almost 98 million units in Q3 2012, a growth rate of 18.6% year-on-year. The company experienced strong demand for its Galaxy smartphones, including the S3 (review) and Galaxy Note II.

Samsung managed to widen the gap between itself and Apple in the smartphone market, selling 55 million smartphones in Q3 according to Gartner. This gave the company a 32.5% share of the global smartphone market.

Gartner’s research showed that Apple’s Q3 2012 sales to end users totaled 23.6 million units, up by 36.2% year-on-year. Gupta stated that the Cupertino-based tech firm built up its inventory ahead of the crucial forthcoming holiday season, traditionally its strongest quarter. The firm is also working on global expansion of its operations as well as readying for the launch of the new iPhone into the Chinese market during Q4 2012. As a result of this, Gartner expects Apple to have a very strong Q4 2012. 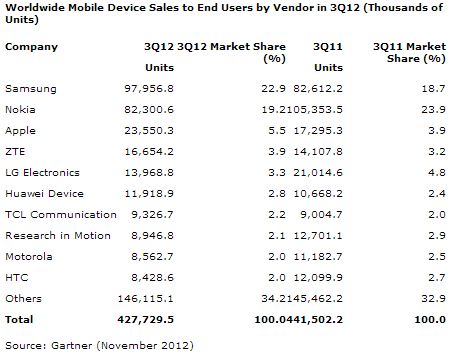 The decline of Espoo continues

With prospective consumers holding out for the release of the company’s Lumia 920 and 820, Espoo had a bad quarter in terms of smartphone sales, which amounted to 7.2 million devices. Gartner asserts that although the new Windows Phone 8-powered Lumia devices will help the company put an end to its smartphone market decline within Q4 2012, it will not result in a significant improvement to Espoo’s market position until 2013.

BlackBerry maker RIM (Research In Motion) laid claim to Espoo’s coveted Top 3 place, not too far ahead of Motorola Mobility and Taiwanese smartphone maker HTC. Gartner stated that RIM and HTC experienced declining sales during the last few quarters, and added that challenges for both firms may prevent these companies from holding onto their current positions within upcoming quarters.

Just like IDC, Gartner also noted the rise of Android during Q3 2012, with Google’s mobile operating system growing its market share by 19.9 percentage points to 72.4% (IDC had it at 75%).

Thanks to the launch of the new iPhone 5, Gartner believes that second placed iOS will increase its OS share during Q4 2012. BlackBerry OS might have lost ground as its market share dropped from 11% in Q3 2011 to 5.3% during Q3 2012, but it still landed the number 3 spot. Samsung concentrated on Android and Windows Phone 8, ahead of numer 4 placed OS bada, whilst Symbian (number 5) is coming to the end of its lifecycle. 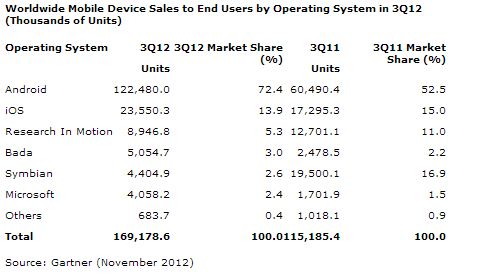 In related news, Gartner’s latest research recently revealed that a whopping 821 million smart devices (smartphones and tablets) will be purchased worldwide this year, adding that device sales will surpass the billion mark (1.2 billion) next year.